Please include your name and the reason for the payment. 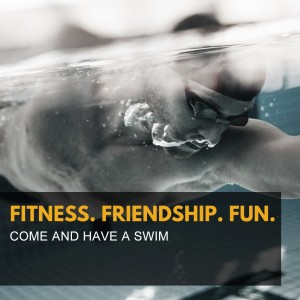 About the Casey Seals - Our History

The Casey Seals had its roots back in 2000 when some members of the North Lodge Neptunes masters club in North Dandenong heard that a new state-of-the-art complex was going to be built next to the Fountain Gate shopping centre.

The split from North Lodge Neptunes

At that time, the North Lodge training sessions were held at the small, privately-owned North Lodge Swimming Academy on Stud Rd. The lanes were narrow, the lane ropes were just ropes, and it certainly did not have the glitz and glamour of modern pools. However, we had exclusive use of the whole pool for our training sessions, and we felt at home there. The North Lodge club was one of the first masters clubs in Australia and had a long and proud history. Many of the members had been with North Lodge for a long time, so there was a strong sense of loyalty to the club and the pool.

However, several members could see that there were opportunities to broaden the membership base to cover other pools in the outer southeastern suburbs. When news of the proposed Casey ARC was heard, they realised that if the club did not spread out to include that pool, another club would form and become strong very quickly. It could even lead to North Lodge struggling to survive.

However, in October 2001, the proposal was rejected by the club, so Greg & Lee Chaplin, Jan Williams and Greg Bailey left North Lodge and set up a new club at Casey ARC.

Before the new club could be created, a few things needed to be resolved such as the club name, aims, logo, colours, training arrangements, etc.

The Casey ARC management were very supportive and wanted to have a masters swimming squad or club based at the pool. We therefore felt that it would be a good gesture to acknowledge this somehow. So we decided to include the word "Casey" in the name (this also reflected the surrounding district of Casey) and match the club colours to the Casey ARC colours, resulting in:

So we had the colours, and part of the name, but we needed more than just "Casey". We wanted to choose something that swam well and belonged to our part of the world. It quickly came down to a choice between the penguins and seals of Phillip Island, and the latter won out. 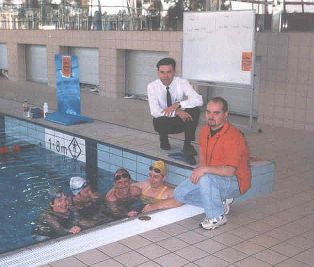 The club started in November 2001 when the Casey ARC complex opened and, shortly afterwards in January 2002, the club was incorporated as the Casey Seals Masters Swimming Club.

We were fortunate to secure Nigel Krieger as our coach from the start and 5 swimmers were present at the first training session held on Wednesday 21 November 2001, within a few weeks of the Casey ARC opening.

Initially a "caretaker" committee of Greg Bailey, Jan Williams and Greg & Lee Chaplin was formed to oversee the running of the club until an inaugural AGM could be held to elect the full committee.

The first committee was elected at the AGM held on 20 January 2002 (click here to see the Notice for the meeting).

Interest in the fledgling club spread rapidly and numbers at training also increased. Within a year, we were getting upto 30 swimmers at training and taking up 5 full lanes (this was before the Casey Tigersharks were training every night at Casey ARC).

This settled back into more manageable numbers a few years later, but the enthusiasm of those early years has certainly not abated.

We have steadily grown in strength and depth over the years, and this has been demonstrated by a number of great achievements:

In total, Casey Seals have broken over 165 Victorian records since the club started in 2001, which is an average of around 17 per year!

No unsolicited commercial electronic messages. The display of any contact details on this website is not an invitation for such messages.

Please note the Copyright Notice and Disclaimer relating to the use of the information on this site. Users of web pages on this site are deemed to have read and accepted the conditions described therein.

We acknowledge the Boon Wurrung / Bunurong people of the Kulin nation as the traditional custodians of the land on which our home pool is built. We extend that to all Traditional Custodians of country throughout Australia and acknowledge that they never ceded sovereignty. We recognise their continuing connection to the land and waters, and pay respect to Elders past and present as well as any First Nations people reading this website.